Suppose I wanted to be a multi-millionaire author. And suppose I wanted to save myself rather a lot of trouble. Indeed, had I a time machine, this would prove relatively easy. I could pop a memory stick in my pocket containing the complete Harry Potter novels, pop back to 1990 (before JK Rowling ever came up with the idea) and then submit them to a publisher under my own name. BUT THERE’S A PROBLEM! Before I began deliberating on how to spend my vast wealth or whether to go for a villa in Capri or St Lucia, I have come up against one of the most fundamental paradoxes built into the fabric of the universe.

The Grandfather Paradox is widely known. If you go back in time and inadvertently kill your grandfather before he fathered one of your parents, you cease to exist. But you CANNOT kill your grandfather, because you never existed in the first place. But J.K. Rowling might take comfort from this: The Harry Potter Paradox. I cannot steal the HP novels from JK Rowling, because in this alternate timeline, she never wrote them, because I pinched them and “wrote” them first. Only…I cannot have pinched Harry Potter, because she didn’t write it, did she? (This type of paradox is explored in the 1990s series Goodnight Sweetheart. Gary, the protagonist travels from the 1990s to wartorn London in the 1940s and makes a living by posing as a composer…of Beatles songs.) So what happens to the memory stick on which I stored the Harry Potter novels I plundered? Does it simply evaporate, like Micheal J Fox’s hand when he interferes with the courtship of his parents in Back to the Future?

The paradox that seems to be written into the fibres of spacetime is this: as soon as you alter the past, the reason or capability to alter it is removed. So you would not alter time in the first instance. In this blog I intend to explore how this paradox is played out in works of fiction.

Sci-fi writers owe a debt to HG Wells: he invented the Time Machine. Or, at any rate, the idea of one in his 1895 novel of the same name. Although Wells did not explain the science behind it, he espouses the idea that time is simply a fourth dimension, through which one can travel as freely as from London to New York. Could this really work? Well, Einstein’s Theory of Special Relativity blew apart all classical notions about the nature of time. It is not absolute or linear, but relative to the observer, depending on the latter’s speed. Of course, don’t expect to age more slowly if you’re simply cruising down the motorway…it only works for speeds that are relatively close to the speed of light.
http://www.express.co.uk/news/science/657500/Time-travel-IS-possible-and-has-ALREADY-happened-say-esteemed-physicists

Physicists including Stephen Hawking predict that folds and knicks in space such as wormholes could create a genuine portal through time. http://www.dailymail.co.uk/home/moslive/article-1269288/STEPHEN-HAWKING-How-build-time-machine.html

This idea really gripped me because it just revolutionises…shatters to smithereens…all our sacred notions about the nature of reality. The nature of now. In a linear, immutable spacetime, yesterday is GONE. It can’t come back. It’s as unknowable and unattainable as the most distant galaxy. No man can tether time nor tide. You can’t return spilt milk to the carton. You can’t raise the dead. And yet, here we are in 2017. Last Saturday, I had my 20-year school reunion. The class of 1997. 1997 is gone. But maybe if I stepped into a wormhole, I could come out the other end in 1997. With apologies to the Carpenters, it really is Yesterday Once More. And would I find my beuniformed self, sitting at my desk in my Alma Mater, learning about volumetric titrations and ablative absolutes? But even if it’s only possible if you happened to have some gargantuan energy-guzzling mega-machine to open the wormhole, it still begs the question: where is the past? Instead of being a burnt-out star, the past is alive and well. The past has not gone. It is just out of sight, as if you’d turned into the next street. What about the future? No longer an unattainable Nirvana, the future beckons like the Pied Piper. It is a cave that can be cracked open, if you know the correct code.

If the past still exists, and the future is already within our reach, could we talk to another time? Could we ‘phone’ across the timesphere like ET across the light years? In Gregory Benford’s 1980 novel Timescape, a team of boffins from 1998 attempt to contact scientists in 1962 using a signal converted from tachyons, hypothetical particles which can travel faster than light, to Morse code. They are desperate to warn the sixties scientists about an impending ecological crisis which will ravage the world. Tachyons have since become a staple in sci-fi. But here again, the Grandfather Paradox rears its ugly head: if the message is successfully transmitted to 1962, and the crisis is averted, then this obviates the need to send a message in the first place. Which, in turn, destroys any possibility of the disaster being averted. But Benford gets around this…he has his protagonists, Renfrew and Markham, send the message in staccato sentences and jumbled letters, so that the crisis is not resolved too quickly.

But could that really work? How could anyone know a purported signal from the past was not just a prank by a couple of students mucking around a basement with a transistor radio? If we want to change the past, wouldn’t it be more congenial to actually go there? In the play-format sequel to the Harry Potter novels, Harry Potter and the Cursed Child, Harry’s son Albus and his friend Scorpius use a ‘time-turner’ attempt to avert the murder of Harry’s childhood friend Cedric, during a school tournament. Cedric had been murdered by Lord Voldemort. The boys’ intervention, however, leads to an alternate reality in which Voldemort won the Battle of Hogwarts, Harry died and Albus never lived. Which, again, creates a Grandfather Paradox, since it was Albus who came up with the idea of changing the past. And yet Albus did not exist. The alteration could only occur given Albus’ existence. 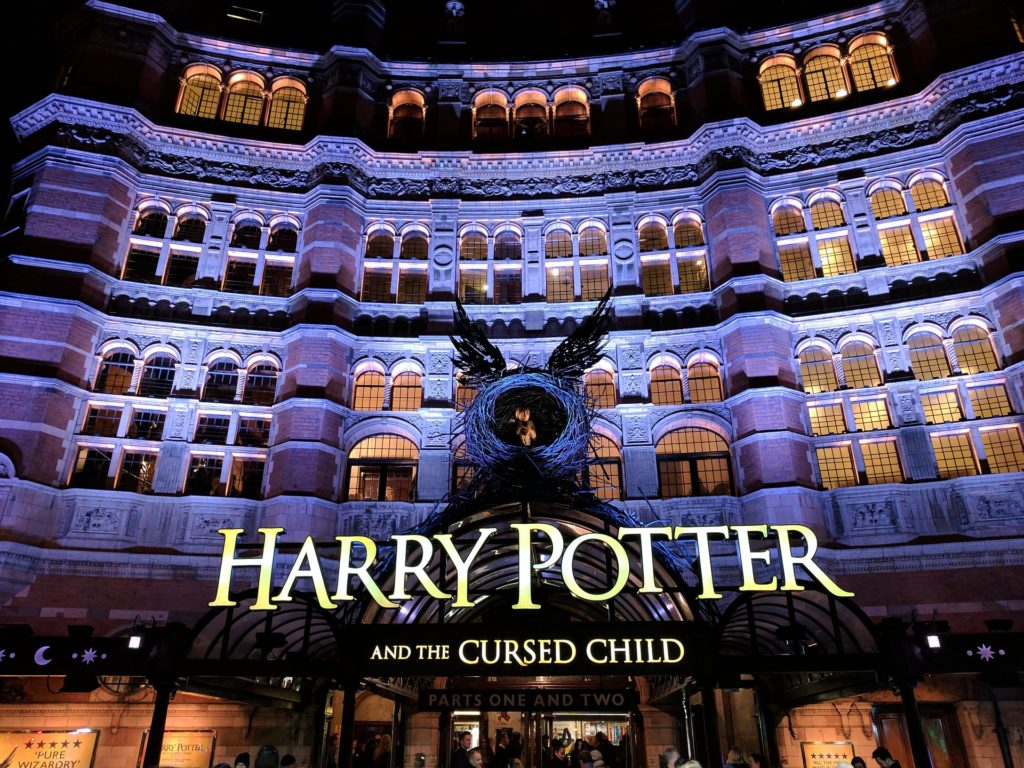 How could Albus turn back time if he never existed?

Yet…whilst the magicality of Rowling’s characters eliminates the need for scientific explanation, how could you travel through time? In the universe of Einstein and Hawking, the theoretical possibility is there. But do you really need a machine that looks like a cross between the Large Hadron Collider and a 19th Century gramophone? Realistically, anything that could replicate or exploit a wormhole would probably need the energy of several trillion nuclear bombs. I don’t think even Richard Branson could pull one off. In his 2014 novel Yours Truly, 2095 Brian Paone uses the notion of ‘quantum entanglement’.
According to Einstein’s theory of relativity, nothing can travel faster than light. No energy, no mass, no entity. The speed of light, ‘c’, is the ultimate speed limit for the universe. This prohibits time-travel to the past. According to classical physics. However, classical physics has been revealed to be incomplete. Quantum physics does not obey the laws of classical physics. Entangled particles are bound together even across thousands of light years. If two particles, separated by a million light years, are quantum-entangled, and one spins a half-turn clockwise, the other will automatically spin a half-turn anticlockwise – like in some strange dance – even though there is no way for any information to pass between them (unless you wait a million years.) If information can ‘beat a light beam’ then the door to time-travel to the past begins to creak ajar.
In Brian’s novel, a man from 1981, Jeff, wakes up in bed in 2095, in a time when cars fly, TVs have been replaced by wall-sprawling TeleSkins, people farm on the Moon, and law and order is ruled by ‘the Justice Computer’. The reason Jeff is in this predicament is that he has swapped places with his great grandson, Junior. Genetically similar particles are quantum-entangled. Junior has exploited the synchronicity of particle spin to create a time ‘bounce’ – Jeff ‘spins’ forward in time; Junior ‘spins’ backward. And in the end, Jeff is left with the ultimate grandfather paradox dilemma…which I will not reveal; you will have to read the book. You can read more about Yours Truly, 2095 here… 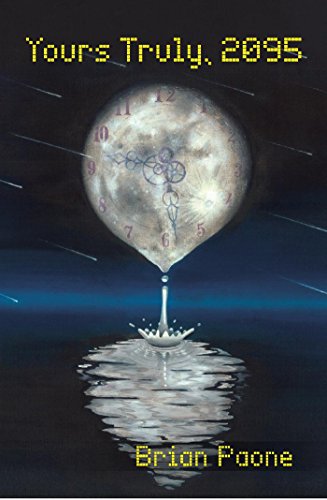 My own Time Gene novels touch on the issues both of communication with the past, and time-travel. The latter is an inborn talent (or gene) that can’t be learnt and can’t be taught, and occurs both physically and by a form of quantum entanglement. Yet it has huge limitations, and the power has to be pooled by a multitude of time travellers and harnessed in a meticulously controlled manner if it is to have any chance of saving the world.

1 thought on “Time travel and the Harry Potter Paradox”